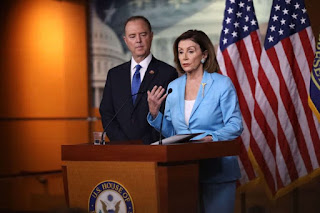 The Republicans just released a huge report that has Adam Schiff quivering with fear.

His lies have finally caught up with him and landed him in a huge mess.

Ten huge pieces of evidence will bring the Democrats’ impeachment crashing down.

The Democrats have a huge impeachment problem on their hands and it is only getting worse.

They were using this impeachment as an underhanded way to try and influence the 2020 election.

The Democrats are going to put the President of the United States on trial as a high-stakes publicity stunt.

And the people aren’t buying it.

The facts just aren’t in the Democrats’ favor as a new Republican report states clearly.

This report doesn’t pull its punches.

It not only clears President Trump; it also accuses the Democrats of abusing their power.

The report starts by saying “The Democrats’ impeachment inquiry is not the organic outgrowth of serious misconduct; it is an orchestrated campaign to upend our political system.”

The report goes on to mention Adam Schiff by name.

It says that this impeachment inquiry is his attempt to redo the 2016 election over again and that despite the Democrats’ best efforts to come up with an impeachable offense, they don’t have anything to show.
According to the Daily Wire, there were 10 key findings that the Republican report made: