Lisa Page Saves Her Own Skin, Tosses McCabe, Strzok, And FBI Under Bus In Tell-All Plea Deal   by Doyle Alexander 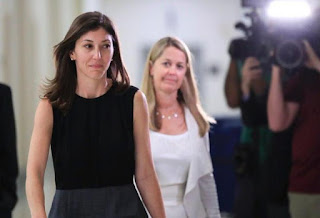 FBI Lisa Page’s attorney, in a letter threatening to sue True Pundit, may have said too much.

Amid the fire-and-brimstone legal rants and threats of court-room Armageddon, lawyer Amy Jeffress might have slipped.

Jeffress is a fine attorney, no doubt. And according to other FBI agents she has represented, she does not pull punches or posture. I spoke to FBI agents who have previously been represented by Jeffress and they attest that is not her style.

I reached out to Jeffress at her request but she doesn’t want to talk.

But what she did say in the letter I believe is quite telling. And a slip.

“She (Lisa Page) is not a target of the Durham investigation,” Jeffress confidently penned in the letter.

To me this means three possible things:

1. Jeffress is posturing. I don’t think that is likely.
2. Page has struck a deal with DOJ to rat out her FBI colleagues, cohorts. In exchange, she gets immunity or the DOJ’s assurances she won’t be a target, indicted.
3. Durham’s investigation is a sham.

Page went public on Sunday in the Daily Beast, professing her innocence and “speaking out” about how unfairly she has been treated in the media, especially by Donald Trump.

Cute interview. And quite staged to get out in front of the upcoming IG report.

The question I had and have for Jeffress and Page is what kind of deal did she strike with DOJ for her client. She can still contact me to answer that.

Because there is no way in hell a thorough investigation into the tainted and corrupt FBI’s trampling and manipulation of the legal code in an attempt to dismantle Trump’s presidency WOULD NOT treat Page as a target.

I love it when attorneys write me letters. They say the darndest things. I have been reading correspondences to and from attorneys spanning four decades. I recognize a slip when I see one.

If Page is not a target, like her attorney professes, either Page has turned rat and cut herself a nice deal or Durham’s probe is a sham.

Via TruePundit
Posted by Pappy at 3:24 PM