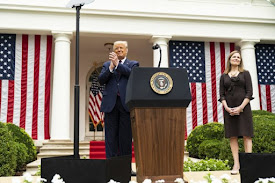 A small business owner during a visit to the Biden White House praised former President Trump during the visit.

According to The Washington Free Beacon:

At an event designed to showcase President Joe Biden’s small business agenda, a store owner credited the Republican-backed Paycheck Protection Program passed during the Trump administration for helping save his business.
Mike Siegel, the co-owner of a Washington, D.C., hardware store, told Biden during his Tuesday visit that the PPP allowed his business to pay at-risk employees while they stayed home from work during the coronavirus pandemic. “The first thing that we did was we took all of our at-risk employees and we sent them home, and we paid them through that entire process,” Siegel told Biden. “That first wave of PPP loans was very helpful to allow us to do that.”
The first wave of PPP loans was sent out in April 2020 under President Donald Trump, not Biden, who criticized the PPP loans during the campaign. Biden argued that the money went to big corporations rather than to American small businesses like Siegel’s.

While the goal of Biden’s visit was to tout the exclusive two-week window he established for small businesses to apply for new aid, Siegel’s business might not have survived to apply for the loan without the support it received last year. The store, W.S. Jenks & Son, received a $162,800 loan last April and put all the money toward payroll.

Biden downplayed the effectiveness of the PPP program before taking office.