So only Chief Justice John Roberts.doesn't think YOU SHOULD...NOT...HAVE FREEDOM OF SPEECH AND RELIGION 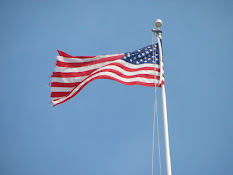 A Christian student who was blocked from passing out flyers on campus has won, at the Supreme Court.

According to The Daily Wire:

A Christian college student who was barred by the college from sharing Christian flyers on campus and told he had to reserve a “free speech zone” time slot has been vindicated by the U.S. Supreme Court. On Monday, the Court ruled 8-1 in favor of Chike Uzuegbunam, who sued Gwinnett College in Georgia after the college interfered with him passing out the flyers in the summer of 2016. 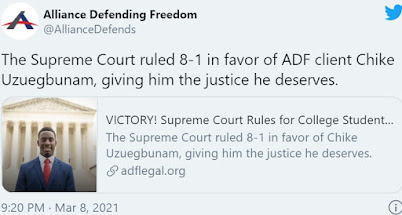 The Court explained the events that led to the lawsuit:

In 2016, Chike Uzuegbunam talked with interested students and handed out religious literature on campus grounds. Uzuegbunam stopped after a campus police officer informed him that campus policy prohibited distributing written religious materials outside areas designated for that purpose. A college official later explained to Uzuegbunam that he could speak about his religion or distribute materials only in two designated speech areas on campus, and even then only after securing a permit. But when Uzuegbunam obtained the required permit and tried to speak in a free speech zone, a campus police officer again asked him to stop, this time saying that people had complained about his speech. Campus policy at that time prohibited using the free speech zone to say anything that “disturbs the peace and/or comfort of person(s).”

The officer told Uzuegbunam that his speech violated campus policy because it had led to complaints, and the officer threatened Uzuegbunam with disciplinary action if he continued. Uzuegbunam again complied with the order to stop speaking. Another student who shares Uzuegbunam’s faith, Joseph Bradford, decided not to speak about religion because of these events. Both Uzuegbunam and Bradford sued certain college officials charged with enforcement of the college’s speech policies, arguing that these policies violated the First Amendment.

The only dissenting justice was Chief Justice John Roberts.

Hey johnny boy ,we will see those pictures when you are no longer needed by them . It's called getting thrown under the bus .