Fact Check: Trump Does Not Own Stake in a Hydroxychloroquine Drugmaker
JOHN CARNEY
7 Apr 2020 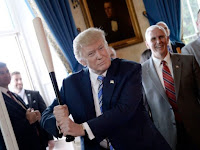 Claim: “Donald Trump Has Stake In Hydroxychloroquine Drugmaker: Report”
That’s the headline across a HuffPost story that goes on to claim that “President Donald Trump reportedly owns a stake in a company that produces hydroxychloroquine, the anti-malaria drug he has repeatedly touted as a coronavirus treatment even though his experts say there’s no strong evidence it works.”
Verdict: False.
The report cited by the HuffPost is from a New York Times story that said: “Trump himself has a small personal financial interest in Sanofi, the French drugmaker that makes Plaquenil, the brand-name version of hydroxychloroquine.”
READ ON
Posted by Pappy at 5:33 PM