The stories about Chinas' "WET MARKETS" have a lot of people thinking more about the food they buy...Read the following article about the food available here in the U.S. You'll be shocked and surprised and disgusted.....


Alarming! Do your own research into this. Something to think about...March 21 at 1:23 AM 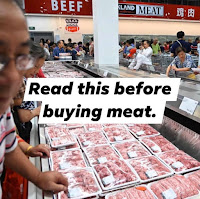 Smithfield Farms, the largest pork producing farm in the USA was sold recently to China with the unanimous support of its stockholders!! The hogs will still be raised here, but slaughtered and packaged for sale there before being sent back here. This includes labels of Morrell, Eckrich, Krakus, Cudahy, Premium Hams, Cook's, Gwaltney, The same with many chickens. They can now be shipped there, but when they come back all that needs to be labeled is that they WERE RAISED IN THE USA. Not that they were processed in China!!! Our great FDA at work again. The chickens will be all processed and most sold to fast food restaurants for sandwiches, along with schools and supermarkets. The China slaughter and processing are not nearly equal to the requirements here.
We recently learned that Starkist Tuna is now owned by Korea , and is in big conflict with the U. S. concerning quality, safety, and records, which Korea refuses to produce.
Read several articles on Google about this, and even one that was defending the eating of tilapia said to avoid the fish that came from China Also,I had just returned home from buying Albertson's 4-day special of 4 bags of frozen tilapia for the price of one.? Sure enough, on the top of the bags, it read "farm raised", and on the bottom in small print it said, " China "read all the way down...

Recently a Food inspector on TV... said he had lived overseas and he had seen the filthy conditions their foods are raised and processed in. It is enough to make you throw up. Some foreign workers have to wear masks as they work in these places, because the food is so rotten and filthy, it makes them want to throw up. Many of their fish on Fish Farms are fed raw sewage daily. He said he has seen so much filth throughout their food growing and processing that he would "never" eat any of it. They raise this filth, put some food coloring and some flavorings on it, then they ship it to the USA & Canada for YOU to consume and feed to YOUR families. They have no Food & Safety Inspectors. They ship it to you to buy and poison your families and friends .

Imported food we eat and the junk we buy: Green Giant frozen vegetables are from China, and so are most of Europe 's Best.
Arctic Gardens are Okay. So is Birdseye.
Never buy the grocery store garlic unless it is clearly marked from USA or Canada, the other stuff is grown in people poop (even worse than chicken droppings). China is the largest producer of garlic in the world; U. S. is next.
Buy only local honey *, much honey is shipped in huge containers from China and re-packed here.

Cold-FX is grown and packed in China and is full of fecal bacteria. Doesn't work anyway, big scam.