I used to kid around and say "One of these days we'll get a knock on the door, and there will be a Chinaman standing there and he'll say to me "GET OUT OF MY HOUSE" ." Still wouldn't surprise me...OR...They declare war against us.....!..

China’s secret plan to topple the US as the world’s superpower  By Larry Getlen   February 8, 2015 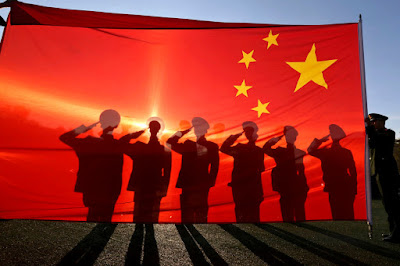 In 1995, Michael Pillsbury, an expert on China who has worked with every US president since Nixon and has, he writes, “arguably had more access to China’s military and intelligence establishment than any other Westerner,” was reading an article written by “three of China’s preeminent military experts” about “new technologies that would contribute to the defeat of the United States.”Enlarge ImageMichael PillsburyWikipedia

It was in this article that Pillsbury first saw the term “Assassin’s Mace,” which refers to a weapon from Chinese folklore that guarantees a small combatant victory over a larger, more powerful opponent.

The article described goals including “electromagnetic combat superiority” that would allow for “naval victory,” and “tactical laser weapons” that would “be used first in anti-missile defense systems.” They also discussed jamming and destroying radar and various communications systems, and the use of computer viruses.

“In the military context,” he writes, “Assassin’s Mace refers to a set of asymmetric weapons that allow an inferior power to defeat a seemingly superior adversary by striking at an enemy’s weakest point.”Enlarge ImageAn antique Chinese “assasin’s mace”

At first, Pillsbury writes, he considered these statements aspirational. But as US intelligence analysts translated documents over time, he came to see otherwise. The Assassin’s Mace, he came to believe, was part of a cunning and much broader strategy, a 100-year-long effort to overtake the US as the world’s superpower.

The point of Assassin’s Mace — which, Pillsbury learned, the Chinese were already spending billions of dollars to develop — was to “make a generational leap in military capabilities that can trump the conventional forces of Western powers,” but to do so incrementally, so that by the time they achieved their goal, it would be too late for the US to respond to, much less reverse.
China duped us

In a sense, the new book “The Hundred-Year Marathon” is Pillsbury’s mea culpa. He readily admits that, as a key influencer of US government policy toward China for the past four decades, he had long been one of many in the federal government pushing the US toward full cooperation with China, including heavy financial and technological support, under the belief that the country was headed in a more d-

“Looking back, it was painful that I was so gullible,” he writes.