OF COURSE....This way, when and if Trump is re-elected, the DEMS can spend another 3 1/2 years lollygagging around, bringing FALSE charges and wasting time so they don't have to do ANYTHING positive....JUST ROADBLOCK TRUMP..!! 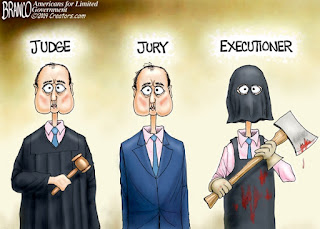 I don’t believe anyone has ever summed up the evils of government in so well, and in so few words, as Ludwig von Mises when he wrote:

The state is God, deifies arms and prisons. The worship of the state is the worship of force. There is no more dangerous menace to civilization than a government of incompetent, corrupt, or vile men. The worst evils which mankind ever had to endure were inﬂicted by bad governments. The state can be and has often been in the course of history the main source of mischief and disaster.

One-hundred percent true, but let us not forget that people do, indeed, get the government they deserve. And when societies are overwhelmed by a crisis is when they are most likely to forget just how corrupt and evil their governments are. As soon as the calls for patriotism begin, people become compliant, and a compliant citizenry is the key to government treachery.

Clearly, Democrats are giddy with excitement over the coronavirus, because they see it as a crisis they can exploit to destroy the economy and, as a result, get Trump booted out of office. And if weak-kneed Republicans give in to Democrats in the next stimulus bill — and the one after that … and the one after that — by allowing them to stuff it full of socialist goodies on their wish-list agenda, they might just achieve their goal.

Now that Adam Schiff and Nancy Pelosi have made it clear that they have learned nothing from their failed impeachment effort and are preparing to give it another try centered around COVID-19, recently fired Fox Business anchor Trish Regan is looking pretty smart for referring to it as an “impeachment scam.” Not that I believe the Dirty Dems planned COVID-19 (although they would have if they knew how to do it), but their announcement that they’re going to investigate Trump’s response to it smells an awful lot like another impeachment scam brewing.

Specifically, Pencil Neck has called for “a nonpartisan commission on the government’s coronavirus response.” Very impressive language, but I have a better idea. Rather than allowing Schiff to start another phony investigation, why don’t Republicans turn things around and start an investigation into the criminal behavior of Adam Schiff?

I guess it’s for the same reason they dare not go after Joe Biden, Hillary, Chuck Schumer, Susan Rice, and the whole cast of establishment/deep state/Dirty Dem criminals who continue to flaunt their crimes on national television without fear of repercussion. As the great Chris Plante likes to say, “It’s great to be a Democrat.”

ROBERT RINGER is a New York Times #1 bestselling author who has appeared on numerous national radio and television shows, including The Tonight Show, Today, The Dennis Miller Show, Good Morning America, ABC Nightline, The Charlie Rose Show, as well as Fox News and Fox Business. To sign up for a free subscription to his mind-expanding daily insights, visit www.robertringer.com. Copyright © 2020 Robert Ringer Reproduced with permission. Original article can be read here.
Posted by Pappy at 1:16 PM