NBC Washington Had To Delete a Tweet About Ralph Northam...Want to Take a Guess Why.   MattVespa @mvespa1Posted: Apr 06, 2020

It’s still appalling that Gov. Ralph Northam is the governor of Virginia. If anything, it exposes the entitlement of liberal politicians, the hypocrisy of their liberal media allies, and the confirmation that there are two separate sets of rules regarding Democratic and Republican politicians. Northam engulfed the Old Dominion in controversy when an old photo from his days at medical school was discovered. It showed two people, one wearing blackface and the other in full Ku Klux Klan regalia. The students picked their photos. And Northam admitted to being in the photo, though he would not say which person he was in the infamous picture. The best part is that after admitting to being in the photo, he backtracked. The best part is that while he denies being in the medical school blackface photo, though he admitted to it, he says he engaged in such behavior in a dance contest in the 1980s; he was Michael Jackson. To cap it off, the lieutenant governor, Justin Fairfax, was hit with two rape allegations, and the attorney general, Mark Herring, admitted to engaging in blackface in college. 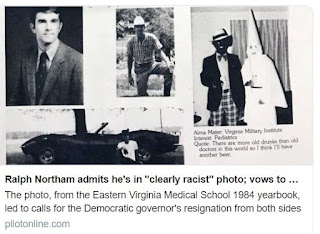 As you can see, no one was going to resign. With no Democrat to take Northam’s spot, a Republican would then occupy the governor’s mansion. It became about hunkering down and hoping the liberal media would give enough cover to survives. It happened. The Washington Post apologized for calling for Northam’s head. There are two separate rules. Democrats can get away with anything—rape, murder, racism, etc., but a GOP politician cannot. The good news is that with this incident, Democrats can’t really lecture us about racism anymore. According to their rules, the governor of Virginia is one—and they protected him. Now, Northam is trying to prepare the state the best he can amid this Wuhan coronavirus outbreak in the U.S.

Right now, it’s been recommended that people wear some sort of face-covering when they go into grocery stores or pharmacies, so Northam decided to have a demonstration and the caption from NBC Washington was quite the doozy. And it led to them deleting the tweet and offering an apology. 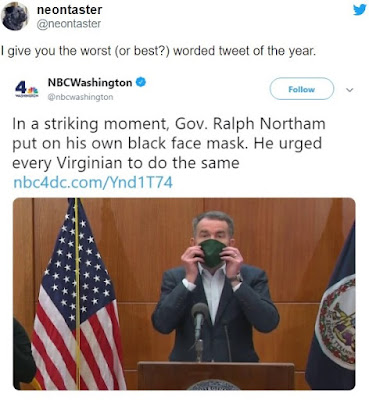 The man has literally no moral authority to lead, but here we are because Democrats can do anything they want as long as they have the media in their back pocket.