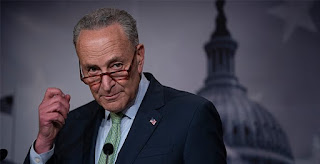 Lev Parnas, who has been federally indicted for fraud, is being held up as a legitimate witness this week by Democrats on Capitol Hill desperately trying to impeach President Trump. Why? Because Parnas, who President Trump called a "groupie" and has been accused of buying his way into Trump world as a grifter, has suddenly changed his opinion.

Senate Minority Leader Chuck Schumer has taken note and invited Parnas to be his guest in the Senate today. Electronics of any kind are banned from the chamber, which has created an issue.

Ted Cruz ✔ Scenes from the impeachment trial: Schumer invited Lev Parnas to be his personal guest today at the trial. Minutes ago, Parnas was ejected from the gallery...because he’s wearing an ankle bracelet mandated bc he’s a criminal defendant accused of serious felonies! #CantMakeItUp