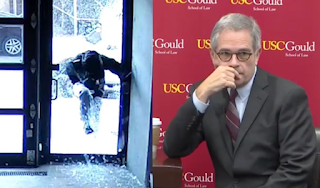 Why are the citizens revolting?

“We are fed up with rising crime,” the notice for the meeting says. “There has been a rash of increasing violent crime in our area that must stop. We are afraid to leave our homes and walk outside.”
“Thanks to our Police many of the major assailants have been caught and charged. However, as our police continue to arrest criminals, our District Attorney, Larry Krasner, let’s them go! This pattern of putting criminals back on the street is putting our lies in grave danger . . . We aren’t going to take it anymore. We are fighting back. This is OUR neighborhood and OUR city. We need the people at the top to follow the oath they took not enact their own personal agendas!!!”

“People are scared to death, they’re scared to walk out of their house. There have been robberies galore,” she said. “It’s just been out of control.”

One of the most recent murders, she said, was committed by a killer that Krasner previously let out of jail. A missing local woman was also found murdered in the basement of a suspicious home where human trafficking may have been going on.

But in a city where the D.A. has basically legalized prostitution, as well as drug use and drug sales, along with retail theft, crime is thriving, thanks to “Uncle Larry,” the D.A. who’s a criminal’s best friend.

“We have a mayor who doesn’t care either,” Della Barba said. “He was just in New Hampshire campaigning while the city is burning,” agreed podcast host John Snedden, a former NCIS special agent.

“You take an oath to protect our city, you should be down here,” Della Barba said. “The only thing the mayor does for us is raise our taxes.”