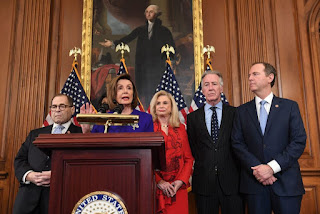 This is pretty great. Ari Melber actually told the MSNBC panel and their audience that the Democrats did not prove their case that Trump committed obstruction of Congress, and everyone flipped out.


MSNBC’s Melber: Dems Have Failed To “Land” Their Case, “I Haven’t Seen…Enough Evidence”

Here’s what he said:

“What the Democrats are arguing is that, basically, something that began three months before they actually voted to impeach should now be resolved by the removal of the president,” he added after being pushed by other panelists. “In every other case, including Nixon, we know the rule has been the president is allowed to fight within the law, is allowed to deny, and, yes, quote, defy, all the way up until the Supreme Court, which takes often more than a year.”

Melber concluded, “So is there enough evidence to support the immediate removal of a president, three months and you’re gone as a precedent, I haven’t seen them land that.”

Yeah, they didn’t like that one bit. Chris Matthews didn’t even address what he said, but rambled on about Trump being a tyrant and George Washington or something.
AND the viewers went even more nuts!