House Impeachment Manager Just ADMITTED That Impeachment Is a Fraud "All About 2020 Election"     by A.M. Smith  enVolv 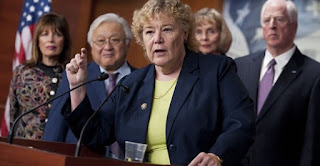 Democratic House impeachment manager Rep. Zoe Lofgren admitted Sunday that the impeachment sham is all about the 2020 election.

In an interview with CNN’s Jake Tapper on Sunday, Rep. Lofgren was asked why the Democrats rushed into impeachment rather than fighting the subpoenas in court.
Thegatewaypundit.com reports: Trump’s Deputy Counsel Patrick Philbin said on Saturday that the House Judiciary Committee must receive approval from the full House before proceeding with impeachment.

Philbin argued that since Pelosi directed various committees to begin impeachment proceedings with a press conference rather than a full House vote, the subpoenas sent to Trump officials were invalid.

The Democrats never even went to the courts to enforce subpoenas, instead, they made up a fake crime “Obstruction of Congress” and launched their shampeachment hearings.

The reason for this is because they want to blunt Trump’s 2020 reelection campaign or keep him off the ballot and Rep. Lofgren openly admitted that on Sunday.

“If we waited for three or four years, the election would be over and the issue would be almost moot,” Rep. Lofgren said.

WATCH
The tyrannical Democrats want to abolish the Electoral College and ultimately get rid of elections and they aren’t even hiding it anymore.

On Wednesday Adam Schiff lectured America and said your vote doesn’t count because the ballot box cannot be trusted.

Your vote doesn’t count if you choose Trump.

“The President’s misconduct cannot be decided at the ballot box, for we cannot be assured that the vote will be fairly won,” Schiff said.