He should be thrown out of the republican party...he acts like a demoRat anyway 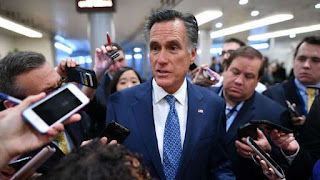 Leaders of the annual Conservative Political Action Conference (CPAC) on Friday night formally disinvited Sen. Mitt Romney (R-Utah) from attending the event next month over his vote to approve additional witnesses in the Senate impeachment trial

."The 'extreme conservative' and Junior Senator from the great state of Utah, @SenatorRomney is formally NOT invited to #CPAC2020," tweeted Matt Schlapp, the head of the American Conservative Union, which puts on the annual GOP confab.


The conference, which is scheduled for the end of next month, is one of the largest conservative gatherings in the country that has emerged as a top meeting place for some of President Trump's highest profile supporters.