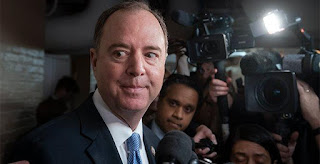 On Friday, the House Democratic impeachment managers wrapped their case after 22 hours of “mind-numbing repetition,” in the words of Jonathan Turley.

On Saturday, the Trump defense lawyers preceded to rip it to shreds in a couple of hours and they’re only just starting.

Apparently House Intel Chair Adam Schiff, the lead House impeachment manager, is upset that now the defense gets to respond and actually call out his falsehoods and mischaracterizations.

According to Fox’s Chad Pergram, Schiff said, “At this point, the president’s team will have the last word. They can mischaracterize what we say or..mischaracterize witness testimony..we hope to have the opportunity to respond and rebut.”

Now, that’s hysterically funny given all his “mischaracterizations.”

He’s not going to fare well if he’s freaking out after the first two hours.
READ ON
Posted by Pappy at 11:57 AM