Another "investigation", which means...NO PROOF, so they will go digging and looking again, So if Trump is re-elected, They'll spend another 3 years LOOKING ?? AND....Maxine Waters is now in charge..? This can prove to be VERY interesting....!!


Democrats Set Up Impeachment II With New Investigation Into Trump and Coronavirus
By Michael Brigham April 23, 2020 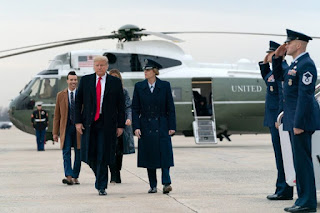 After vowing to continue impeachment efforts against President Donald Trump and hold a second future vote to remove him from office, Democrats appear to be launching a new investigation that seeks to blame Trump for the global coronavirus epidemic.


Vanity Fair reports Massachusetts Senator Elizabeth Warren and nine other Democrat senators fired off letters to inspector generals at Homeland Security and Health and Human Services demanding documents they claim will prove “‘slow distribution of supplies,’ including personal protective equipment (PPE) and ventilators, along with an astonishing lack of transparency, ‘suggest a process plagued by confusion, inconsistency, and potential political interference.’”
Warren and Democrats claim without evidence Trump is stealing medical supplies from “blue” states and doling them out to political allies in Republican-run states “based on the electoral concerns of President Trump and his political allies rather than public health needs.”
Warren’s letter follows an announcement by House Democrats that Congress would form a new congressional panel to investigate Trump over coronavirus.
“The chairman of the House Homeland Security Committee unveiled legislation to create a commission studying the government’s response to the coronavirus pandemic,” CBS News reports. CBS reports that investigation, led by Democrat chairman Bennie Thompson would work with another panel, led by Trump impeachment ringleader Adam Schiff.
House Democrat impeachment leader Maxine Waters assured Democrats in January that even though they did not have enough votes to impeach Trump for “Russian collusion,” they would try again with new claims.
“We will not stop,” Waters told MSNBC as it appeared Democrats did not have enough votes to impeach Trump. Waters announced they would continue impeachment efforts by filing new subpoenas and investigating new claims.
Posted by Pappy at 12:27 PM