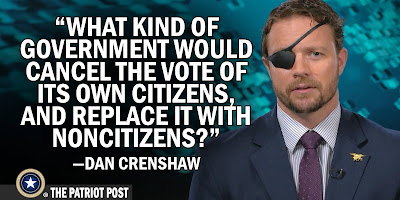 The Democrat-controlled House passd bill HR 1 Friday — the dubiously named “For the People Act.” The purpose of the bill, according to Democrats, is to “expand Americans’ access to the ballot box, reduce the influence of big money in politics, and strengthen ethics rules for public servants.” However, far from “expanding Americans’ access to the ballot box,” the bill instead runs roughshod over Americans’ constitutional rights and states’ rights, diminishing the power of citizens’ votes by failing to prohibit noncitizen voting.
Rep. Dan Crenshaw (R-TX) noted the irony of a bill ostensibly crafted to expand and protect the voting rights of Americans but doing the exact opposite: “It sounds like I’m making it up. What kind of government would cancel the vote of its own citizens, and replace it with noncitizens?” Crenshaw added, “Today I offered a motion to recommit #HR1 reaffirming that only US citizens should have the right to vote. Dems rejected it. Next time you go to the ballot box, keep that in mind. The future of their party is in cities like San Fran, where illegals can vote. Let that sink in.”