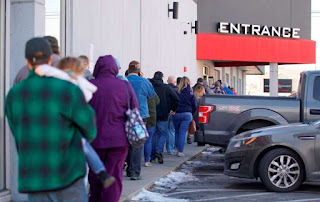 © George Frey/AFP/Getty Images People line up to buy guns and ammunition at the Ready Gunner gun store in Orem, Utah. Ammunition and guns sales have spiked in Utah in the days since the storming of the Capitol building in Washington. (Photo by GEORGE FREY/AFP via Getty Images)

But despite the Jan. 6 assault on the U.S. Capitol and an FBI assessment that extremist groups plan attacks on government institutions in the coming days, government and industry data indicate that the huge surges of buyers seen earlier in the year have not been repeated since the November election.

Gun sales typically soar in the weeks following the election of a Democratic president, as buyers scurry to purchase firearms for fear that the new chief executive will fulfill campaign promises to tighten regulations on gun sales.
READ MORE   Then go buy a gun...!
Posted by Pappy at 3:05 PM