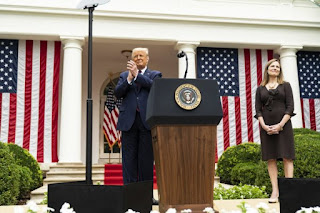 President Trump made a promise that he will be back in some form as he departed Washington for the last time as President.

President Trump on Wednesday morning told supporters that “we will be back in some form” after he departed the White House for the final time as president, just hours ahead of the inauguration of President-elect Biden.

Trump made the comments at Joint Base Andrews as he was about to fly to Mar-a-Lago in Florida. The presidential Salute battery fired a 21-gun salute with ceremonial artillery guns as Trump walked to the podium to speak.

“I hope they don’t raise your taxes, but if they do I told you so,” Trump said.

Potentially foreshadowing more involvement in politics to come, Trump said “we will be back in some form.” There’s been speculation that Trump could run for president in 2024, or that he may start his own political party.

It is unclear how resident Trump will enter the political landscape moving forward, but will surely be watching.

We will be back.

As in I Shall Return.

This is a long way from over.