The only President in my lifetime to put the American people and our Country FIRST, and his "PARTY" wants to DESTROY him...CROOKED POLITICS...!!

Karl Rove is issuing the threat. 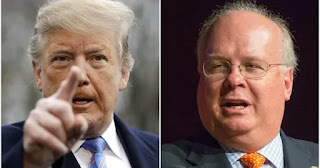 Republican Party establishment strategist Karl Rove is informing President Donald Trump that he will likely be impeached unless he stops talking about electoral fraud.

Rove is trying to use the president’s precarious position following the Jan. 6 storming of the U.S. Capitol to pressure him into folding. He appeared on “Fox News Sunday” with Chris Wallace to deliver the threat.

Wallace asked: “Senate Republican Leader Mitch McConnell says that he is keeping an open mind about the second impeachment trial of Donald Trump, a big difference, sharp difference, from his clear opposition from the very start of the first impeachment trial just a year ago. What do you think, Karl, are the chances that 17 Senate Republicans, and that’s what it would take if all of the Democrats vote for conviction, 17 Senate Republicans would vote to convict Donald Trump and to keep them from running again?”