Read at "90 MILES FROM TYRANNY"

Are Mitch McConnell and His Wife Financially Tied to Communist China?  by Luis Miguel January 18, 2021 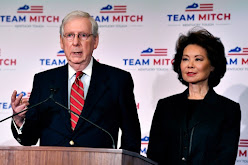 Following the money has always been the surest way to finding wher a politician’s true loyalties lie.

Peter Schweizer, a senior contributor for Breitbart and author of such exposés as Clinton Cash and Profiles in Corruption, said on Fox News’ The Next Revolution that McConnell’s “position on China has softened over the years,” a change Schweizer attributed to the growing relationship between the Chinese government and the Chao family’s company.

READ AT 90 Miles From Tyranny :