Do you think WE will ever get to see this material...???

The FBI investigating the FBI 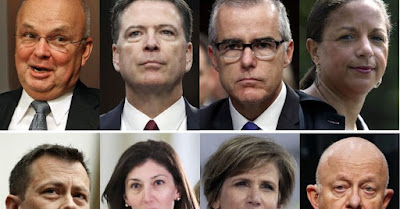 Just hours before leaving the White House, President Donald Trump declassified documents related to Operation Crossfire Hurricane, the FBI's investigation into Trump campaign officials during the 2016 election and well after the Trump administration took hold in January 2017. The announcement was made in a memo sent to the Attorney General, CIA director and Director of National Intelligence.

"At my request, on December 30, 2020, the Department of Justice provided the White House with a binder of materials related to the Federal Bureau of Investigation's Crossfire Hurricane investigation.  Portions of the documents in the binder have remained classified and have not been released to the Congress or the public.  I requested the documents so that a declassification review could be performed and so I could determine to what extent materials in the binder should be released in unclassified form," Trump wrote. "I determined that the materials in that binder should be declassified to the maximum extent possible.  In response, and as part of the iterative process of the declassification review, under a cover letter dated January 17, 2021, the Federal Bureau of Investigation noted its continuing objection to any further declassification of the materials in the binder and also, on the basis of a review that included Intelligence Community equities, identified the passages that it believed it was most crucial to keep from public disclosure.  I have determined to accept the redactions proposed for continued classification by the FBI in that January 17 submission."

According to the memo, the content of some documents will remain secret. The documents will become available to the public at a later date and after the FBI completes redactions.

"I hereby declassify the remaining materials in the binder.  This is my final determination under the declassification review and I have directed the Attorney General to implement the redactions proposed in the FBI's January 17 submission and return to the White House an appropriately redacted copy," Trump wrote. "My decision to declassify materials within the binder is subject to the limits identified above and does not extend to materials that must be protected from disclosure pursuant to orders of the Foreign Intelligence Surveillance Court and does not require the disclosure of certain personally identifiable information or any other materials that must be protected from disclosure under applicable law. Accordingly, at my direction, the Attorney General has conducted an appropriate review to ensure that materials provided in the binder may be disclosed by the White House in accordance with applicable law."