WHERE WERE THE HYPOCRITES  THE LAST FOUR YEARS...??
Turned off by Biden’s approach, GOP opposition to stimulus relief intensifies  Erica Werner, Seung Min Kim, Jeff Stein 27 mins ago
President Biden’s pitch for bipartisan unity to defeat the coronavirus and resurrect the economy is crashing into a partisan buzz saw on Capitol Hill, where Republicans and Democrats can’t agree on ground rules for running the Senate — let alone pass a $1.9 trillion stimulus bill. 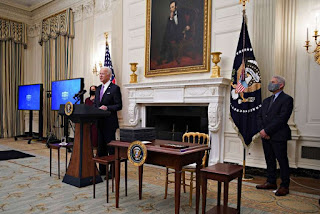 Biden’s relief package is being declared dead on arrival by senior Senate Republicans, some of whom say there has been little, if any, outreach from the Biden team to get their support. Liberals are demanding the president abandon attempts to make a bipartisan deal altogether and instead ram the massive legislation through without GOP votes. And outside groups are turning up the pressure for Biden and the Democrats who control Congress to enact economic relief quickly, even if it means cutting Republicans out of the deal.

In the face of these competing pressures, Biden may discover he can get a big covid-19 stimulus bill or a bipartisan deal — but not both. The path Biden chooses with his first major piece of legislation could set the tone for the remainder of his first term in office, revealing whether he can make good on his promise to unify Congress and the country.

UNITY..??
“It’s important that Democrats deliver for America. If the best path to that is to do it in a way that can bring Republicans along, I’m all in favor of that,” Sen. Elizabeth Warren (D-Mass.) said. “But if Republicans want to cut back to the point that we’re not delivering what needs to be done, then we need to be prepared to fight them. Our job is to deliver for the American people.”
READ ON + VIDEOS
Posted by Pappy at 1:17 PM