Amazon terminated its contract with free speech platform Parler for “violent content on your website.” But Amazon itself deals with merchandise 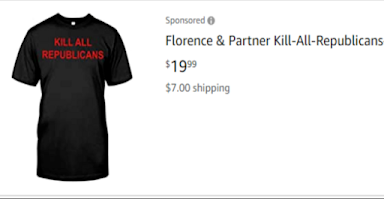 Amazon terminated its contract with free speech platform Parler for “violent content on your website.” But Amazon itself deals with merchandise that advocates the death of all Republicans or specifically targets President Donald Trump.

The Media Research Center found at least 204 examples of merchandise sold on Amazon that promoted violence, either toward President Donald Trump, Republicans or members of the police force. Riot gear, including tasers, brass knuckles and stun sticks were also sold. Some of these violent products included a flag with a graphic image of Trump blowing his brains out, a mug with the slogan “Where is Lee Harvey Oswald now that we really need him?” and a black T-shirt with a red slogan, “Kill All Republicans.” The shirt that urged the death of Republicans was even a sponsored listing on Amazon.

Amazon accused Parler of “potential hate speech,” while it is selling actual Nazi memoribilia and jewelry covered with swastikas. And while Americans were outraged at the death of police officer Brian D. Sicknick who was struck with a fire extinguisher at the Capitol riot, Amazon sells at least 130 pieces that condone that kind of violence with the hateful slogan, ACAB (All Cops Are Bastards). That ACAB term is popular with rioting members of Antifa.

The Amazon Terms of Service states, “Amazon does not allow products that promote, incite or glorify hatred, violence, racial, sexual or religious intolerance or promote organizations with such views. We’ll also remove listings that graphically portray violence or victims of violence.” These terms of service do not apply to media. Therefore, the Media Research Center did not examine music, books, television or movies.