There’s no way you can “unite our people” when you and your cohort are characterizing more than 200 million of them as racists and supremacists.
No chance to “join forces, stop the shouting, and lower the temperature” when your team is categorizing opposing viewpoints as “more dangerous than al Qaeda.”
And no path to “carry all of us forward” when you launch your invalid administration with divisive, literally in-your-opponents’-face actions. Like requiring masks, reversing the job-creating Keystone XL Pipeline, rejoining anti-American agreements and international organizations, and roaring “olly, olly, oxen free” to caravans of illegal immigrants who lower wages and steal jobs (plus vote Democrat).
The New America “Opt-Out” is far from a fantasy. It’s now, more than ever, an inevitability.
The eminent Nixon-era economist Herb  posited his famous law: “If something cannot go on forever, it will stop.”
Here’s the “Maistros Corollary:” If something must happen, it will.
It must happen. And it will, sooner than you can even imagine.
Sleepy Joe And Tucker Have It Wrong: The Only Peaceful Way Out Is To Opt Out Bob Maistros  January 21, 2021 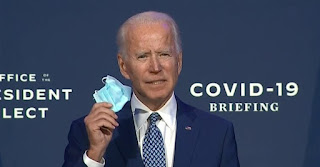 ‘I know speaking of unity can sound to some like a foolish fantasy these days. I know that the forces that divide us are deep and they are real. But I also know they are not new … our better angels have always prevailed. In each of these moments, enough of us – enough of us – have come together to carry all of us forward, and we can do that now.”

“The idea that groups of Americans will somehow break off into separate peaceful nations of like-minded citizens is a fantasy.”

It’s fascinating that America’s most prominent plagiarist used the same term – “fantasy” – as its most prominent pundit in, wrongly, dismissing the growing momentum toward the only logical response by red jurisdictions to the coming Californication of America.

Some pro tips, Mr. Fake President, if you want to hold forth on “unity”: